Many will say that one of the Native Hawaiian's most remarkable achievements would have to be the Hawaiian canoe, renowned for its fine craftsmanship and design based on the Native Hawaiian's vast knowledge of the sea. Without the canoe, the Hawaii we love and know today would not be the same. The canoe was an immensely valued possession, as it was the only means of transportation to voyage to other lands, to run errands, and to fish the open ocean. For kings and chiefs, canoe building was also a means of displaying the strength of the islands' armies.

The act of building a canoe was considered a very important life activity for the Native Hawaiians, with members of the ohana (family) taking on different roles during the long process. Various specialists were needed to create a canoe, using the limited tools and materials available: trees, plant fibers (for cordage), stone and wood. The skills of creating canoes having been passed down from generation to generation, with the Hawaiian canoe being unique in many ways. From the fine wood of the Koa Tree, Native Hawaiian's were able to hollow a single tree to form a one piece canoe hull, which on average measured between 20- and 30-feet long (6-9 meters). There have been reports from many early explorers that have put some of the larger canoes at lengths upwards of 60-feet long (18 meters)! This is quite a remarkable task, as many South Pacific canoes are created using individual plans of wood which were sewn together to form the hull of a canoe.

There are various unique design features of Hawaiian canoes, which set them apart from others, and truly speak to the expertise of the Native Hawaiians as skilled laborers and sea explorers: 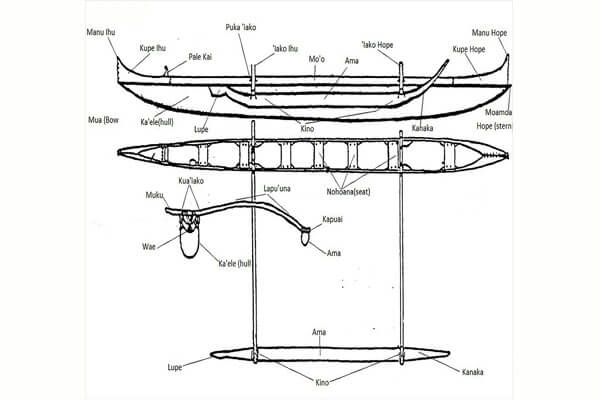 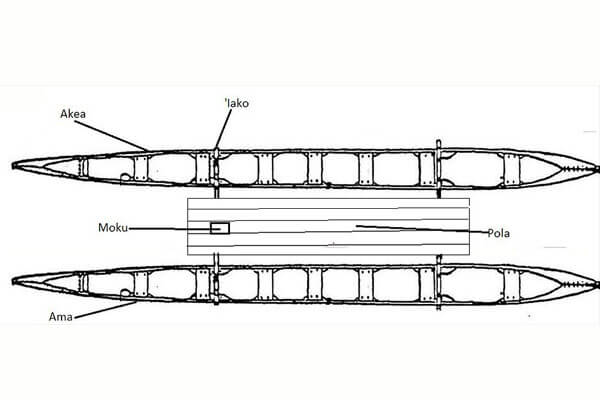 Religion played a vital role in the Native Hawaiian's lives, with a canoe expert (kahuna kalai waa) having spent many hours training to not only be a skilled sculptor, but a priest versed in the religious ceremonies involved when building a canoe. This role was very important, as those in position would conduct the entire process, from choosing the tree to create the canoe to determining launch locations, and all other decisions related to the canoe.

When a man did decide that he would like to make a canoe, he would first consult the canoe expert (kahuna kalai waa), upon which the kahuna would find a tall, straight koa tree. Afterwards, the kahuna would sleep before the shrine in the men's eating house (hale mua). During the night, if he dreamt of a naked man or woman, it was believed that the koa tree in question was not a good tree. On the other hand, if the kahuna dreamt of a well dressed woman or man, this would signify that the tree was good for a canoe.

Once it was determined which koa tree would be used for building the canoe, the kahuna and his helpers would prepare for their trip into the mountains. Along with them they bore a pig, coconuts, red fish (kumu) and awa, which were offered to the gods during a religious "thank you" ceremony which was held at the site of the koa tree. The following morning, the pig was cooked and eaten, upon which the kahuna would check the tree once more before cutting it down. By watching for the elepaio bird, believed by Native Hawaiians to be the goddess Lea of the forest, kahuna would watch to see if the elepaio birds pecked at the tree for worms, which would signify that the tree was not fitted to be a canoe. If the elepaio were seen passing by the tree and not pecking at it, it would then be ceremoniously cut down by the kahuna.

When the tree would begin to crack, it was kapu (forbidden) that anyone talk or make a noise. Once the tree had fallen, the kahuna would climb onto the trunk of the tree, and while facing the cut end, would call for his white ceremonial malo (traditional Hawaiian loin cloth). Once donned in the malo, he would turn towards the top of the tree to show where the head of the tree is to be cut off. There he would tie an ie ie lei, recite a prayer, then cut off the head of the tree. When this was done, the people would then cheer in excitement, for now they could get to work on the canoe.

With the koa tree now cut down, the kahuna would then carefully plan the measurements for the seats, hollow inside and other inner parts. A neck was then carved on the stern of the canoe, to which lines were tied and were used to haul the unfinished canoe down the mountainside. Once the canoe was hollowed and shaped for transportation down the mountain, another feast and prayer session would be declared by the kahuna. During this ceremony, the gods were called to bless the canoe and to protect it during its journey down the mountain. Men, woman and the children of the village were all called upon to help haul the canoe using ropes tied to the neck of the canoe. Each person took their position, with the kahuna being the last person behind the canoe, and the god of the kahuna kala waa (canoe expert) following behind the group to bless the area as they passed through.

The canoe was carefully carried to the canoe house (hale waa) where it was shaped and finished in the following order: 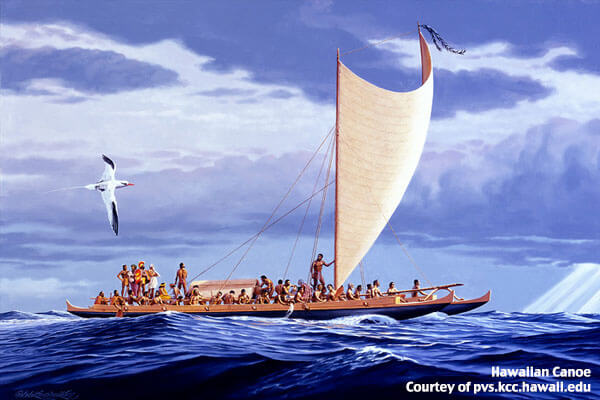 Once the canoe was completed, the consecration ceremony (Iolowaa) was performed. The canoe was taken out to sea where they caught a single fish which they brought back to shore to offer to the fish god Kuula. During the ceremony, noise disturbances were strictly forbidden, as it was believed that any noise would render the canoe no good to use.

Continuing with the ceremony, the canoe was then carried to the hale waa (canoe house), where a spread of pig, red fish, and coconuts were strewn before the kahuna as offerings to the gods. It was then that the kahuna chanted a prayer to the gods to thank them for their guidance in creating the canoe and in keeping the ohana safe. Given that the ceremony went without incident, feasting then took place and the canoe was then turned over to its rightful owner by the kahuna.

The lashing of a canoe (aho hoa waa) is a very personal and solemn event, with no one being allowed to disturb the craftsman, and with talking being kept at a minimum to make sure that concentration was keen so that lashing was properly done. If a chief was to have his canoe lashed and the craftsman was disturbed, the offender would be put to death for the offense. The process of lashing calls for cording to be wrapped in a way that prevents the lashing from coming undone in the event that one cord does break.

The Hawaiian outrigger canoes that you can see today are very similar to the canoes once seen by Captain Cook. Unfortunately there are no longer the much larger canoes that had been documented by Cook and his crew. It was reported that some of the largest Hawaiian canoes were carved from large California redwood logs, which made there way to the remote coasts of the Hawaiian Islands. In the 1870s there was a 108-foot long (33-meters) hull that was said to have been discovered, which is now long gone.

Now that you have a better understanding of Hawaiian canoes, in the following, you will learn a little bit more about our Polynesian ancestors' canoes and vessels.

In Tahiti, several sections of hollowed out logs were joined together to create large hulls. The bow was fitted with a projecting plank, while the sterns rose high, out of the water. The forward boom on the outrigger was not directly attached to the to the float, but was indirectly through the use of pegs. Most of the Tahitians seagoing canoes were twin canoes. The planks, connected with sennit, with the seams being caulked with coconut fibre, possibly soaked with breadfruit gum. Because of this construction, canoes of many sizes could be created. The sails of these canoes were narrower and taller than the Hawaiian sail, but used the same fundamental principles. There was also a space between the canoes which was decked and hatched, with one or two masts. 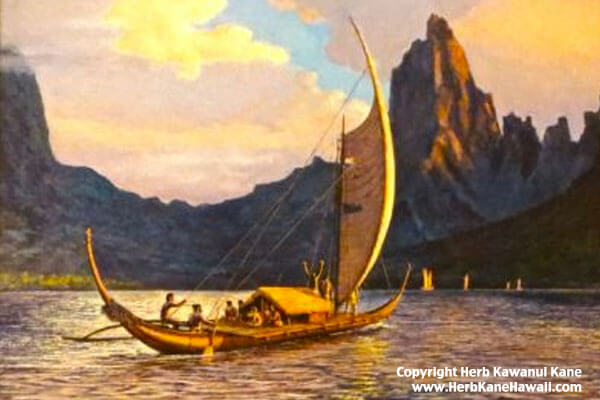 From the Tuamotu Archipelago, a chain of islands and atolls in French Polynesia, the Tuamotus' double canoes were known to be the finest in the Southwest. The canoes were made of small, individual pieces of wood which were sewn together. They were equal-ended so that they could sail in both directions, unlike the Hawaiian and Tahitian canoes. This also enabled them to have a windward facing permanent cabin. The sails on the Tuamotus' canoes were wider than the Tahitian sails, and could be lowered and rolled up to be secured. The size of these ships were considerable, comfortably accommodating 60 to 100 people. Due to the size of this real ship, grand steering oars and paddles were needed to keep it on course. 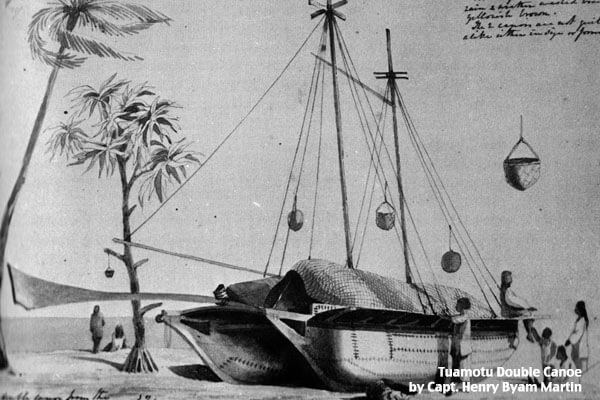 When the Europeans first came to Tonga, they bore witness to canoes which reached massive lengths of 150-feet (46-meters). The Tongan double canoe featured a secondary, smaller canoe. The sail was triangular and was suspended from the mast. The Tongan canoe was designed after the Fijian canoe, with the Tongan's perfecting the Tongan-Fijian canoe in the 16th century. 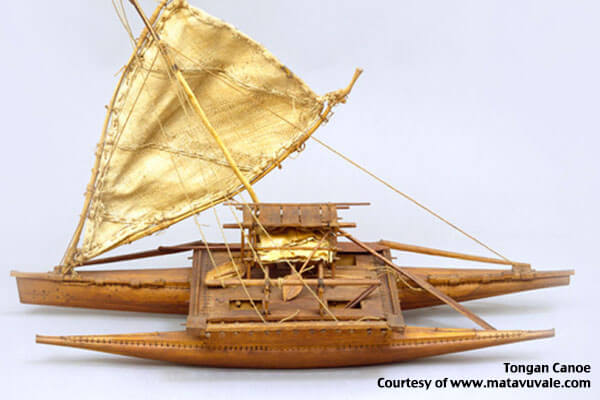 Sailing the open ocean required much preparation which may extend over the period of many months. Canoes were recaulked and relashed, and rigging was overhauled. Canoes were normally equipped with paddles, steering paddles, seats, bailers, mat sails, and possibly tassels of feathers or pennants. Old Hawaiian paddles were tipped with a midrib at the end on one side.

The next most important things would be the stores of food and water that would be conveniently packed away. Sand, stones, earth and firewood were carried for the imu (oven). Food that was commonly taken on long voyages included sweet potatoes, taro, bananas, coconuts (for the water), and breadfruit. This would typically last a week to about ten days. Other common foods that were packed and which held well without spoiling quite as quickly were dried taro and sweet potato, prepared foods, dried bananas, and mature coconuts. Dried fish was a staple on long voyages, and fresh fish could be caught and kept alive. Pigs and chickens could also be kept alive on copra (dried coconut kernel), and once they were ate, the dogs would be fed the remains.

The Tuamotuans and the Tahitians would normally carry no more that 21 days' provisions. The Polynesian canoe is a fairly fast sailing ship, which can make 8- or 9-knots. The voyage from Tahiti to New Zealand could have taken around 11 days. The Polynesians were very careful to choose their weather, with the Tahitians waiting for the perfect season of the year to make the long journey back home. Along with this, on the day of departure, all proper religious ceremonies and rites are to be conducted, and the omens must be right on that day.